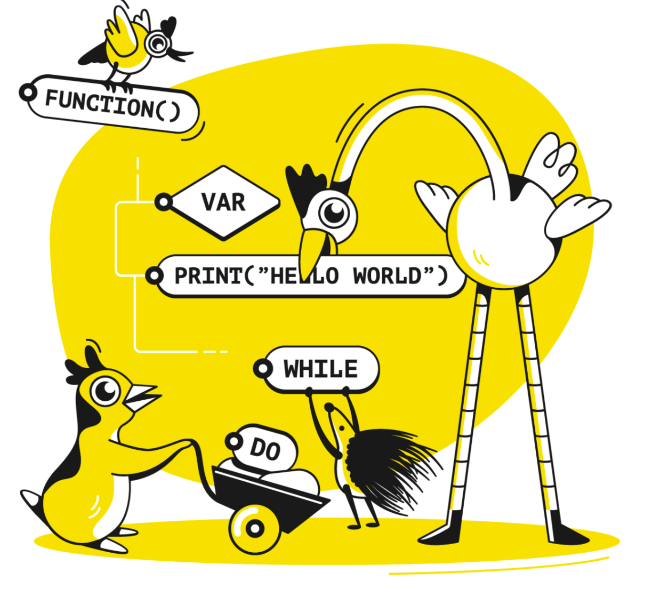 What is the best programming language for beginners?

Once you have decided to take the first steps as a programmer, you will quickly ask yourself which programming language you should start with. The selection is very broad.

Which programming language should I choose to start with?

One of the most common questions we get while learning to program is:

“What programming language should I start with?”

You can now find out what the answer has to do with driving a car and why the language is ultimately completely irrelevant.

Lots of confusion in the first language

One of the first things you will hear as a novice programmer is that if you want to program, you have to master a programming language.

The first step is to listen to the 1000 opinions of programmers. Because every developer prefers a different programming language for learning.

Time for you to learn to understand the whole thing so that you can evaluate it more objectively.

What is a programming language?

First, let’s take a look at what a programming language actually is and how it came about.

A programming language is a tool to give commands to a computer. If you run several commands one after the other, that’s a program. The program is translated into machine language.

This machine language basically consists of many arithmetic operations that are carried out one after the other. When computers were the size of houses, when there were no personal computers, computers were operated using simple switches and punch cards. So in principle a computer cannot add anything other than binary. (Binary: 010111110101)

But it does this so quickly and efficiently that all of today’s computer technology is based on it.

For a simple addition you first had to convert the numbers into binary numbers and then operate several switches.

Then you got a binary number, which you could then convert into a number that we could read. If you are interested in the topic, please comment below with “Computer”, because today we are not going to go into any more detail.

Since the operation of these switches was so complicated and became more and more complex, the calculating machines continued to develop until they actually became useful. In the process, a machine language was created that could execute various arithmetic operations one after the other.

The developments range from assembler to Basic and C ++ to JavaScript, and Wikipedia lists over 350 programming languages.

Very simply, a programming language is a tool for performing many arithmetic operations with switches. Remember that.

Which language you start with depends on what you want to do as the first project.

C, C ++, C # mainly occurs in the server / desktop environment, so it is used for programs that run locally on a computer. C # was developed by Microsoft, the programming is done accordingly under Windows. C and C ++ can be used to program for many platforms such as Linux, Mac and Windows, but hardware-related programming is also carried out with C and C ++.

Java is a language that runs on different platforms for which there is a Java Virtual Machine. There are people who say Java is slow. I don’t want to judge this, the speed depends on too many factors.

Java is also the programming language for apps on the Android platform. If you want to write apps for Android smartphones, you’ve come to the right place with Java. You can use it to write web applications and desktop applications as well as 3D games. This language is really very versatile.

Javascript and PHP, these are the languages on the Internet. In combination with HTML and CSS, these are powerful tools. If you want to create programs for the web, for example games, web apps or responsive websites, you can’t avoid Javascript.

With Javascript you have a huge advantage as a beginner. If you use a modern browser like Firefox or Chrome, you don’t need to worry about a development environment at the beginning. All you need is a text editor and you can start right away, all the necessary programming tools are integrated in the browser.

This is also the main reason why the learn programming for beginners course works with this language, there you learn not only the basics of programming languages, but also how to create games and small web applications with Javascript.

These languages are mainly characterized by allegedly easier readability. Many beginners find the language very easy to understand. “Experts” quickly dismiss Basic as a gimmick. In the early days of computer development, the BASIC language was developed to teach beginners the principles of programming.

Incidentally, BASIC is an abbreviation for: “Beginner’s All-purpose Symbolic Instruction Code”, which means something like “Symbolic all-purpose programming language for beginners”. But BASIC was further developed. In Office programs such as Microsoft Word, Excel, etc. you can use Visual Basic to add your own functions to the standard functions. This is helpful if you want to automate certain work in Excel or Word.

Of course, these are by no means all languages. Take a look at the TIOBE index. This is a list of the most popular languages, which is always kept up to date. Python is currently the trend for beginners. I have listed a few more programming languages here.

Are all languages the same?

If you limit yourself to today’s modern programming languages, ultimately all languages can do the same thing. And here we come to our example.

“What is the best car for you to learn to drive with?”

Imagine you want to drive from A to B in a car. If you don’t have a driver’s license and are just starting to learn to drive, it doesn’t matter which make of car you’re doing it with. The model, engine and optional equipment do not matter.

But there are exceptions:

Some cars have small driving aids that help with learning, for example. Or there are cars for a specific purpose, such as trucks or buses.

For this you have to learn more specifically and get your own driver’s license. You have basically learned how to use the car tool to get from A to B. And once you’ve learned, it’s relatively easy to drive in another car.

And that is also the reason why it doesn’t matter which programming language you start with.

You should only consider one thing when choosing: How easily and how much experience can you gain with this language?

For example, to come back: which is better for a novice driver?

The fast convertible, where every bump costs a fortune, or the used small car that you can get anywhere in and that is cheap to refuel?

If you don’t have to pay attention to your wallet, you can also learn to drive a sports car. But maybe a little previous experience helps, right?

Now, which programming language is the best in software heaven?

I don’t want to overuse the car example, so one last time: Ask a car forum about the best car to learn to drive.

Sure, everyone prefers what they have learned with. For the reason that he had the most learning experiences with it. That’s why the answers you get to such questions on the Internet are so different.

Do you have to learn all programming languages?

In order to give beginners a little insight into which languages a budding programmer learns, I’ll briefly show the languages I have learned. I did the first steps and instructions in Quick Basic.

After the first attempts with C and C ++ failed, the next thing I learned in school was Pascal, and with the knowledge I gained in this way, I also understood C ++. During my training, I wrote the first programs with a graphical user interface (GUI) using Delphi / Object Pascal.

There I was involved as a webmaster and learned PHP, HTML / CSS. Next up was C # and Java. As an employee I am currently working with Java. For learnProgramming (); I got used to Javascript. That might sound like a lot of work, but there are certain basic elements of the languages mentioned that are the same for these programming languages.

Once you have acquired a programming language, you can switch very quickly. Switching from e.g. C # on Java is pure hard work, because you simply reprogram a few code examples that you know from C # in Java. The devil is in the details when such programming languages have special functions that are not available in other languages.

The following applies here: Read through the documentation and work through tutorials.

3 things to consider when choosing

Start with a language that is easy to get started with without a lot of installation. The language should give you the opportunity to do many small projects in the areas that interest you.

Helpful when that is possible with a programming language.

No matter which language you learn at the beginning, at some point you will come to a limit where you can no longer work with the same programming language.

The causes can be different: Either something is not performing well, the language lacks a certain feature or it becomes too cumbersome to continue working with the language.

So you should always keep in mind that you can change the programming language as soon as it is necessary and the change is no longer a problem because you have already understood the basics.

My recommendation for you as a beginner

Which language you choose depends on the purpose. Language is nothing more than a tool.

You can drill a hole with a drill. Which drill head you have to use depends on many factors. But you learn how to use a drill with no matter which drill head. To get to your goal, you sometimes have to try different drill heads.

Still want to know which programming language to start with?

My personal and subjective opinion is Javascript.

JavaScript for the Win!

And for the following reasons:

And that was the short answer to the question: “Which programming language should I start with?”

If you have any questions or comments, please comment below this article.